In 2012, ESY India was given the responsibility of building & establishing the ESY brand in India and SAARC countries. Ever since, the company, under the able leadership of Dr.V.P. Sajeevan has taken giant strides in the digital imaging industry, emerging as one of the leading category players. ESY India in collaboration with Pinnacle Corpn, Taiwan launched a range of Point Of Sales (POS) printers and scanners under the brand name ESYPOS. In a short span of time, ESYPOS has emerged as one of the leading brands in the POS space with a robust product, backed by a nationwide distribution and customer support network comprising more than 300 Dealers and around 250 authorised service centres. ESY India is an ISO 9001-2015 certified company. All its products come with the RoHS and other safety certifications. The company is an active member of MAIT, India.

Today, the company has offices in cities like Chennai, Gurugram, Delhi and Cochin. While ESY India’s first office came up in the year 2012 in Chennai, its second office was opened in Gurugram in the year 2014, third in Delhi in 2015 and the latest in Cochin in 2016.

Since inception, the company has launched many high quality POS printers and scanners, establishing itself as a strong player in the Indian POS market. ESY India added more feathers in its cap with the introduction of ESYPOS Label Printer Series in 2017 and the very latest GST ready cash registers and POS machines in June 2017. Innovations continued to happen at ESY India with the launch of two more one-of-its kind products, the world’s smallest Touch POS in the year 2017 and India’s first all-in-one PC POS in January 2018.

Needless to say, ESY India is well on its way to becoming one of the most sought after digital POS companies in the coming years. 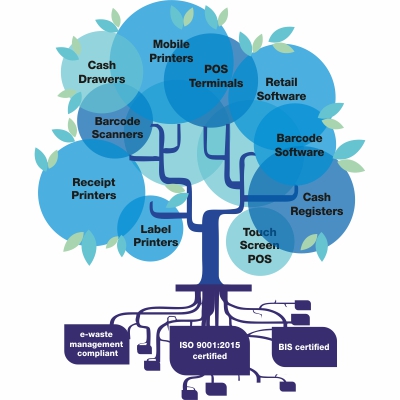 To emerge as India’s leading digital Point of Service (POS) company by the year 2020.

To achieve a winning turnover of ₹ 400 cr by 2020 and to continue improving on it year on year by setting up manufacturing in India, strengthening our marketing network and attaining the highest level of customer satisfaction.

Dr. V.P. Sajeevan is one of the leading experts in the Digital Imaging industry in India and has worked with big brands like XEROX and Canon in the past.He was with Canon India for over 14 years. During his stint as Director, he was instrumental in taking Brand Canon to an undisputed leadership position. His special thrust on consumer experience helped to bring vast changes in the brand’s market approach and eventual acceptance by the industry and customers.

His Marketing terminology BIBLE (Before I Buy Live Experience) was well accepted and appreciated by the industry. After a long stint with Canon he moved to leadership consultancy for a few leading brands in Asia.

Sajeevan is also associated with leading management institutes in India and abroad as a leadership speaker and consultant. He holds a Masters in Economics from University of Calicut and is a Post Graduate in Business Administration from Bharathidasan University in India. In Nov 2017 ,he received his Doctorate in Marketing from Aldersgate University , Dublin.

ESY India is an ISO 9001-2015 certified company and all products are BIS certified.

No products in the cart.